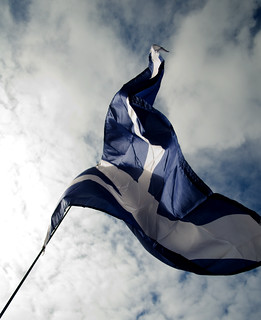 A couple of weeks ago, a friend said that they hadn’t heard any good reasons to vote “No” in this week’s referendum. Sensing a challenge, I started to write a post, outlining the reasons why I’m going to vote “No”. But it didn’t get very far, in large part because my feeling was that the two sides are so fed up that they have long given up listening to each other, instead spouting repetitive tracts to their own supporters and completely missing the undecideds who may well determine what looks like being a very close result. The gulf between the two sides seems larger than ever, despite my belief that actually not much separates us, and that both sides truly want the best for Scotland.

It also seemed hard to believe that there were any undecideds left after what feels like years of fact-throwing.

I have certainly stopped listening, even to my own side, whose negative tactics have lived up the “No” on their posters. So when I was asked to come up with an introductory question to kick off the seasonal dialogue – which is all about listening – that was the topic I chose. I remembered the last of the James plays which I saw during the festival, full of nationalist fervour but also using the mirror tool to reflect the of the nation. I thought about using Burns’ ” To A Louse” as an opening text – “to see oursels as ithers see us!” – but instead, being me, I opted for music: Arvo Pärt’s quietly reflective “Spiegel im Spiegel” (“The Mirror in the Mirror”) to get us listening to each other.

The purpose of the evening wasn’t to discuss the referendum per se, but talk (and listen) about how we can heal the split between two camps after the vote: what would it take for us to listen to others’ views?

But the conversation inevitably strayed into the referendum itself. It was very civil and non-partisan (despite one member of the group apologising for being too stridently partisan – I didn’t think he been!) but understandably emotional. People have strong feelings about this, including me.

There were a great many different views: since we could all see good and bad things about both sides the debate, there were more views than participants. We talked for a couple of hours, and I can’t remember all that was said – we followed lots of tangents.

But here are some of my impressions – what I remember of what I heard (which may not be what was said…).

The number of undecideds surprised me. I have been pretty sure how I would vote for many months, having listened to early arguments and found them generally unconvincing. Everyone in the discussion last week was intelligent, aware and actively participating in the debate – but hadn’t been convinced either. One person felt they had had an epiphany that very morning and had decided how they would vote whilst sitting in the sunshine in their garden; but they have subsequently changed their mind. (I included them in my unscientific poll as “don’t know”!)

Someone else, an expat from a European state, didn’t feel comfortable having a say in determining another nation’s future (despite believing they would never live anywhere else). I have heard that a lot from English-born voters, too. But the rules say you have a vote – so I reckon you should use it.

In many ways, this felt like many conversations I have had over the last year or so. Perhaps a bit more intense – more listening and more concentrating – but in essence, the same kind of discussion I’ve had over pints in pubs or over coffee in a cafe.

Within 48 hours, we’ll know the outcome – the result is expected around 7am on Friday. And then we can get down to rebuilding relationships and – perhaps – building a new country. Either way, I think we’ll have to learn to listen to each other again.

What unites us is a lot more than what divides us.

[Nb I have revised the last paragraph of this post since it was brought to my attention that I had said precisely the opposite of what I intended. This is what I wanted to say. One word wrong completely changed the meaning. And that is why one should respect sub-editors!]