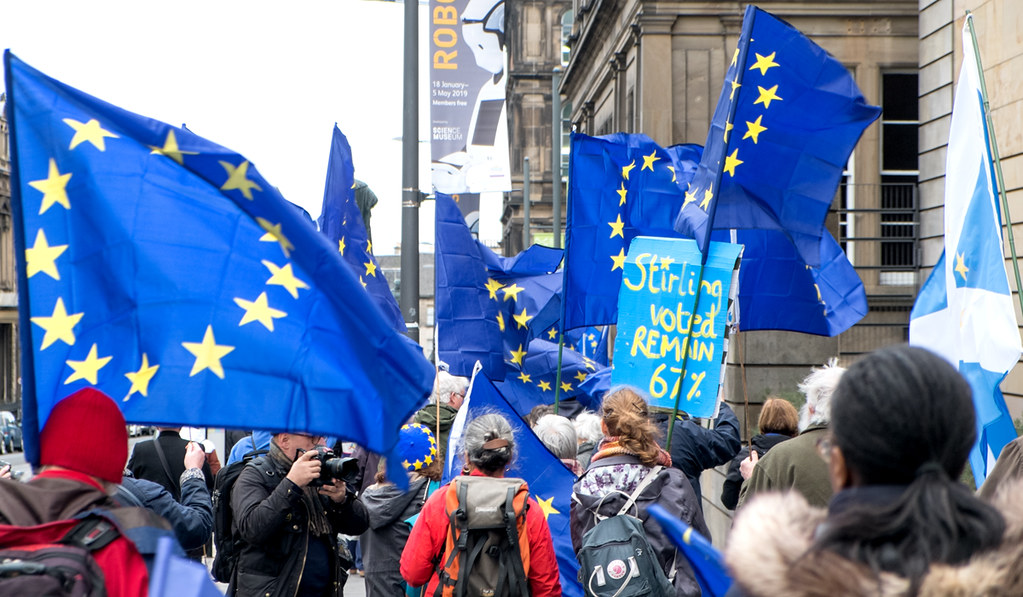 I’m a glutton for punishment: two days after the Rally For The People’s Vote, another conference on Brexit, with many of the same contributors, but this time with an academic bent, providing a rather different perspective. “Brexit: What Now, What Next”, organised by the Centre for Constitutional Change and the UK In A Changing Europe, was almost set up to fail, since “what now” changes daily – and yet, after recent shenanigans in Westminster, it seems nothing has changed except that the next “meaningful vote” is now two weeks further away, perhaps making “no deal” more and more likely as the UK runs out of time. The conference took place the day before Tuesday’s votes and amendments, although I don’t think the outcome of those debates will have changed much.

There were three panels (two comprising academics, one of politicians), and Mike Russell MSP providing a key note speech.

The first panel looked at “Deal or No Deal”. Unfortunately, the consensus seemed to be that “no deal” is increasingly likely. Simon Usherwood looked at what had created the impasse in parliament, and the way MPs beliefs in the party system were likely to endure it continues. And he concluded that whatever the outcome, it was unlikely to be stable, leading to a succession of crises. Drew Scott

Drew Scott looked at the different outcomes of Brexit and the nature of the UK’s long term relationship with the EU (which has yet to be negotiated – the withdrawal agreement is just the start of a long, slow process). A free trade agreement between the UK and EU would require a long and probably tortuous negotiation around the fundamental features that make the single market work, such as the legal framework relying on the European Court of Justice, accepting the EU’s “level playing field” and the likely requirement to pay into the EEA budget – crossing several of Theresa May’s “red lines”. In the meantime, the UK would be stuck in the “transition period” or relying solely on WTO rules, which no other nation does. (It is clear that there’s no deal that could possibly be as good as that we have as being part of the EU, making leaving an economic folly.)

Mary Scott  presented a view from the Republic of Ireland: one of puzzlement since the UK’s referendum and fear as the negotiations had progressed, not least because the close relationship between the UK and RoI would be threatened by the imposition of a hard border in contravention to the Good Friday Agreement. The backstop negotiated between the UK and the EU was therefore not up for debate by the RoI – and any one country had the potential to block the negotiations. Support for the idea of a united Ireland was gaining traction, just one of several constitutional threats to the “United” Kingdom. It was also pointed out that UK ministers supporting “no deal” would be in a very awkward position constitutionally, since they would be advocating that the UK breaks international agreements in the form of the GFA.

I’ll leave aside the second, political, panel because those aspects have probably been well aired already. At least they found a Tory willing to discuss Brexit, even if he couldn’t countenance a referendum on the deal!

The third panel looked at “Brexit, Devolution and the Future of the Union”. This is a big one in Scotland, which voted to stay in the EU by 62/38 and voted to stay in the UK in 2014 55/45, when the “No” (to independence) campaign claimed that staying in the UK was the only way to assure continued membership of the EU. It’s not a surprise that many feel duped that we are now being dragged out of the EU against our wishes.

Dan Wincott and Jo Hunt explored how devolution had so far focused on those issues which are devolved or not: where competence lies on specific issues. But Brexit has shown that devolution hadn’t really dealt with how devolved governments should work together. The Sewel Convention is just that – a convention, which can be ignored. Matters which have been devolved within the framework of the EU, such as agriculture and fisheries, could become issues of contention if one parliament wants one set of regulations and another is opposed. The devolution settlement doesn’t set out how to resolve these, and the UK government’s willingness to ignore the will of the Scottish Parliament during Brexit does not bode well for future cooperation.

Nicola McEwen examined possible routes to Scottish independence. The context of a further referendum (or “IndyRef2”) has changed considerably since 2014; and so have the economics. Westminster holds the power to call a referendum: it may not grant that power to the Scottish government again, which could itself precipitate a constitutional crisis. If Scotland voted for independence from a UK outside the EU, the debate over the Irish border would be repeated, perhaps worse because although issues such as the Good Friday Agreement wouldn’t be in play, after three hundred years of union, Scotland lacks much of the infrastructure it might need – not least a hard border and sufficient ports to deal with its trade.

Mike Russell MSP closed the conference, covering much the same ground he did in November and just two days before, too. He outlined the futility and negativity of Brexit, and how Brexit is an anathema to Scotland: a vision of Britain at odds with Scotland’s view of itself. In particular, Scotland needs immigration: freedom of movement is hugely valuable to Scotland, as well as being culturally enriching. The Scottish government is having to prepare for “no deal” whilst believing “no deal” should be ruled out. He firmly believed an extension to Article 59 was needed – he thought three or four months might be possible – and a referendum on the deal was the only way to clear the impasse in Westminster. In which case he would campaign vigorously to Remain in the EU.

The conference, and the political activity the following day, left me somewhat despondent after the euphoria surrounding the rally for the People’s Vote. Despite nothing materially changing, the likelihood of “no deal” arising simply because the British government runs out of time; the futility of Theresa May getting to continue negotiations with the EU when the EU has said they will not reopen negotiations – the very hopelessness of a Brexit in which British citizen lose their rights with no benefits accruing at all. It is enough to make one weep.

This site uses Akismet to reduce spam. Learn how your comment data is processed.