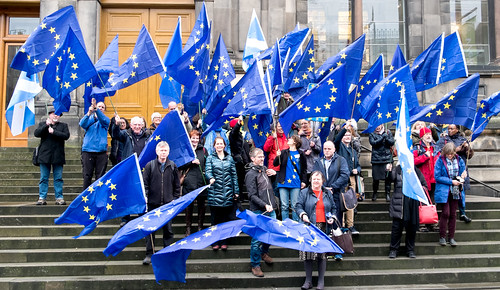 As the clock moves relentlessly on, the European Movement in Scotland and People’s Vote Scotland held an indoor rally in Edinburgh, apparently one of several across the UK to call for a People’s Vote. What people said on Saturday may have changed with Tuesday’s votes in Parliament – but as far as I can tell the votes achieved nothing other than to kick the can down the road for another two weeks, so maybe not!

The rally was well attended – absolutely chocker – and had politicians from all major Scottish parties – bar the Conservatives (what one audience member described as “the elephant not in the room”. The organisers explained that they had invited Remain-friendly Tory MPs and MSPs, but none were willing to put their head above the parapet – nor their country before their careers).

Sir Anton Muscatelli Principal of Glasgow University, laid out the economic position: that there were no consensus forecasts in which Brexit would benefit the UK, and the worst for the economy would be an increasingly likely “no deal” Brexit, reducing GDP by a probable 8.5% by 2030. The short term pain by crashing out without a deal on 29 March 2019 could be considerably worse.

Muscatelli set out what he hoped would actually happen before the end of March to halt such a catastrophe, a course of events that was echoed by just about every speaker: that parliament would vote to block “no deal” (the first opportunity to do so being Tuesday, when parliament voted against “no deal” in a non binding vote), require the government to seek an extension to the process of leaving the EU through Article 50, and that a referendum on the deal, the People’s Vote, would be held. If we were successful in obtaining a People’s Vote, he thought we needed to run a very different campaign from that in 2016: there’s a real need to tell a positive message about the EU and the rights it confers. We need to win over hearts.

The next speaker, Catherine Stihler MEP, set out many of those benefits of EU membership. I’ve heard Stihler speak a couple of times about Brexit in the last year, and she’s a passionate advocate for Europe; so I was disappointed to learn that this would be one of her final engagements as an MEP: since her job may no longer exist after March, she will soon be taking up an alternative, non-political role. 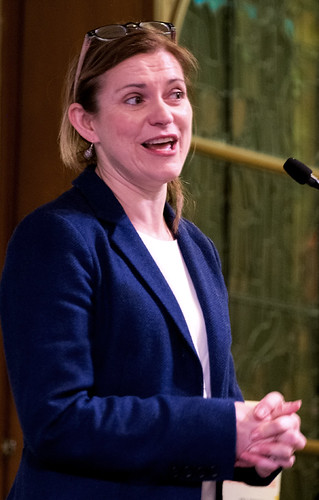 Stihler emphasised that the EU is about people: rather than being citizens of nowhere, we’re citizens of all twenty eight countries within the EU. None of those in the room want to lose that citizenship, not the rights that go with it. It was, she said, “the best peace process ever”.

Mike Russell MSP, the Scottish cabinet secretary for constitutional matters, followed. I’ve heard him speak a couple of times on Brexit recently: he too is passionate about the EU, and peace. He justly laid into Mark Francois’s recent xenophobic outburst, explaining how peace between members of the EU meant that unlike his father, neither he nor his son had had to fight. The single market and customs union within the EU had bound twenty eight nations together, and the negotiating process was proving how inextricably we are linked. He was adamant that staying in the EU was essential for Scotland, and that, despite the SNP’s stated aim of independence, keeping both the UK and Scotland within the EU would be best for Scotland. 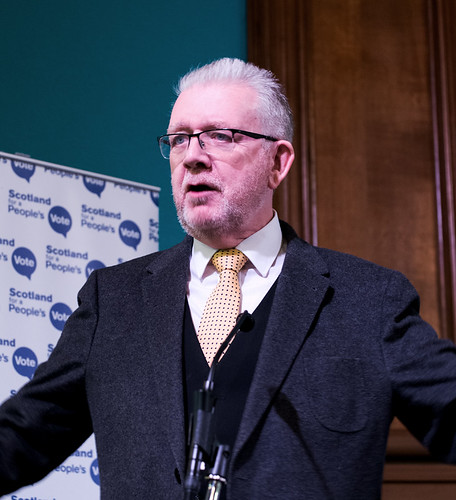 This was echoed by Joanna Cherry MP for the SNP and Andy Wightman MSP for the Scottish Greens, who together with Christine Jardine MP (LibDem) and Ian Murray MP (Labour), made up a panel of politicians. There was a split between the unionist parties – LibDems and Labour – and the pro independence SNP and Greens: Jardine wanted the SNP to take a second referendum for Scottish independence off the table, otherwise risk alienating pro Remain Conservatives. Cherry made it clear that the SNP wanted the UK to remain within the EU – not quite the same thing – and that the SNP were working with other parties to achieve that. 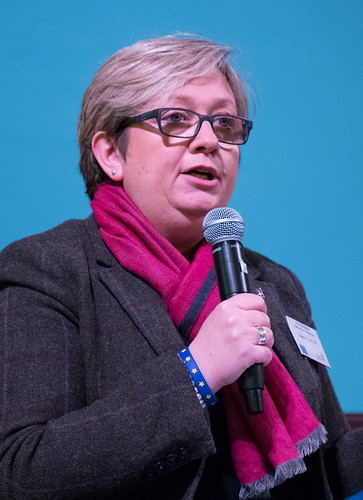 Other than that there was a broad consensus between the three MPs and the Green MSP about what must be done – including working with like minded MPs of any party to achieve it. Murray pointed out that there simply wasn’t time to pass all the legislation required for any outcome before March 29 (even “no deal” requires a lot of bills to be passed or amended) and that an extension of Article 50 is essential for any form of orderly Brexit.

Jardine laid out the importance of what was at stake – our futures – and that she was confident that it world be possible to builda cross-party consensus for the People’s Vote: party allegiance was less important than stopping Brexit. A referendum would provide politicians a way out of the current impasse. 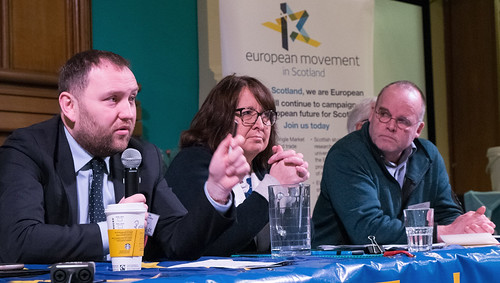 Wightman took a different tack, attacking the vitriol of Leavers: calling elected members and Remain protesters “traitors” and “mutineers” is dangerous territory. Achieving the People’s Vote was not straight forward: determining the question would be difficult, and the outcome was far from clear; another campaign could be even more divisive. Whatever the outcome, Westminster needed constitutional change to correct the flaws opened up by Brexit.

The last panel consisted of campaigners from the European Movement In Scotland, Scotland for a People’s Vote, and Our Future Our Choice. With all the attention focused on Westminster (where there seem to be daily demonstrations by both Remain and Leave protesters), it is hard to know what to do: if there were a People’s Vote, the course of action would be close clear – to campaign for Remain as an outcome (recent polling shows results very similar to the 2016 referendum – 61% for Remain and 36% for Leave) – but the decision to hold a referendum rests with Westminster. The campaigners were adamant that we need to build pressure for a referendum, through street stalls and leafletting, convincing the public of the need for a People’s Vote. Some members of the audience felt larger, more emphatic actions were needed – mass rallies, for instance – and not just preaching to the converted.