The City of Edinburgh Council has redesigned its domestic recycling processes, and over the last month it has been implementing the new design in my neighbourhood.

In addition to large communal bins for non-recyclable rubbish (destined for landfill), domestic recycling used to work with weekly curbside collections: cardboard and plastic bottles (only plastic bottles) collected one week; glass, paper and tin cans the other; and weekly collections of food waste for composting.

Each type of waste had a separate receptacle – red and blue boxes for cardboard and glass, a sealed container for food.

It wasn’t perfect. I would frequently forget to put out my recyclable waste and have to wait for the next collection. In a windy city, where gales seem to coincide with the weekly collections, the emptied containers would be blown all over the place.

The council announced in January that they were changing the process in February.

Instead of weekly collections, there are to be permanent large communal bins for general recycling (cardboard, paper, tin cans and plastic containers – not plastic bags, which are not recyclable), for glass, for food waste, and for landfill. Four different communal bins.

In many ways, this will work better: no more missing the weekly collection, no more boxes scattered across the road by the wind. Drop off recycling when it suits.

But, firstly, communication has been poor. The launch date of “February” was unclear: when in February? Should I keep putting out recyclable waste for pick up before then? Where will the new communal bins be?

(These questions remain unanswered, despite the system already changing…)

Secondly, the one new communal bin for general recycling – cardboard etc (but not plastic bags) – looks very like the old landfill bin. It arrived a couple of weeks ago in the same place as the landfill bin it replaced. OK, it does say “general recycling” on it, with a long list of acceptable items and another list of unacceptable items. Maybe my neighbours can’t read. Maybe they didn’t notice the signs. Either way, on the first day it was on the street, it was full of plastic refuse sacks (presumably full of waste for landfill, not recycling). A couple of days later, it had just recycling waste in it, and someone – possibly the council, possibly not – had taped a new notice to it detailing again what could go in it – plus stating that putting the wrong items in the bin would mean it all had to be sent to landfill.

A couple of days later, I looked in it to see someone had placed polystyrene blocks in it – another no-no, meaning the whole bin is apparently destined for landfill.

The other bins – for glass and food waste – haven’t appeared, leaving my neighbours (and me!) clearly confused as to what to do with our waste. Before the changes, today would have been a cardboard collection; several neighbours have put out cardboard for collection, despite the new communal bin for cardboard (if it hasn’t been contaminated with landfill waste…).

According to the leaflets put through the door, the reason for the change was to increase the rate of recycling. In the short-term, this has clearly failed: at least two full recycling binloads will, according to the notice stuck on the bin, be destined to landfill because they contained the wrong kind of waste.

People are confused, and most likely throwing out recyclable waste in the landfill bins because of the uncertainty. The glass and food waste communal bins haven’t appeared. (Perhaps they have been camouflaged…)

So – in the short-term at least – the implementation has failed. It might just be bedding in. I can’t help thinking, though, had the design been better, with clearer communication (and, for instance, a timetable of what was happening when), it could have been a lot smoother.

Update: not only “today would have been a cardboard collection – but it was. The neighbours’ cardboard has been collected from curbside. For many systems, dual running during implementation makes a great deal of sense. But it has left me even more confused than before.

For many years, I had a Pure Siesta DAB radio. I liked it a lot: it worked well, it sounded good, and it was easy to use.

Particularly, its buttons were clear and easy to use. Kind of important in the dark.

But then, about a year ago, it stopped working. I couldn’t work out why it wasn’t working, so I bought a replacement. I thought about just getting the same again, but decided instead to try something else.

So I bought a Roberts, since they had a good reputation.

This one. It’s called Dreamtime.

A much smoother, more stylish design. Sleek, streamlined even.

And almost immediately I found out it was awful to use. The buttons, sitting level with the surface, are impossible to differentiate in the dark. Not a single day went by when the radio didn’t make me swear at it. Not necessarily conducive to a restful night. I was forever hitting the wrong button, and there wasn’t a way to cancel the operation without switching it off. Sometimes hitting “Select” actually reset the default settings so I’d have to reset them to my preference.

It might have looked good, but the Dreamtime was a real nightmare to use. Whoever designed it hadn’t used it in the dark. I doubt if they had used it at all.

Last week I finally cracked, pushed over the edge by it dreadful way of working. And so, whilst it was functioning much as it always had, I decided to get myself a new clock radio.

I bought a John Lewis Spectrum Clock. This. 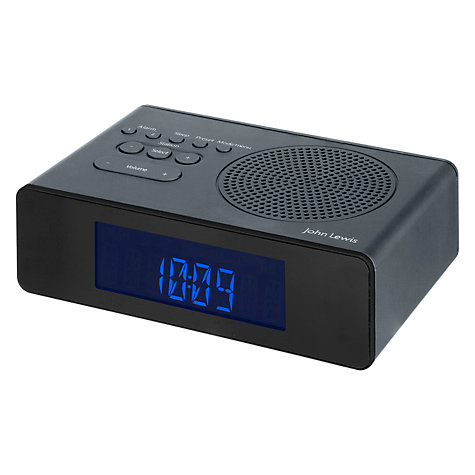 It is small, it is simple, and I love it. It doesn’t do anything flash, it sounds fine, and it is a joy to use, even in the dark. The buttons are clearly laid out in batches, and feel different. Not once have I hit the wrong button by mistake. It sounds fine, too.

I’m not sure what the lessons are here. Maybe that “good” design is far more than eye-catching design: design has to include function; and good-looking might not necessarily by good design.